1. DARCY BEAT THEM ALL 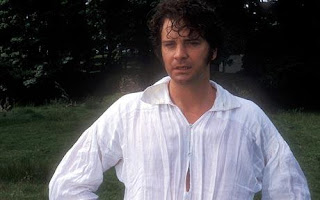 Mr Darcy / Colin Firth has been voted Britain's best-looking actor, beating fellow Hollywood hunks Rupert Everett and Clive Owen.
The 50-year-old actor, who got an Oscar nomination this year for his film 'A Single Man', won a million hearts playing William Darcy in the BBC's adaptation of 'Pride and Prejudice' in 1995.
Everett, 51, famous for his role in 'My Best Friend's Wedding', came second in the list, followed by 'Closer' star Owen, 45, in the poll conducted by Wizard Jeans, Daily Star reported.
Who would you have voted as Britain's best looking actor? Do you agree with the result?
2. SCENTS & SENSIBILITY
Are you ready for a new modern version of Sense and Sensibility? A new Austen-inspired film is coming out in 2011: Scents and Sensibility . We don't know much about it. It is in production. These are the names in the cast : Marla Sokoloff  and Ashley Williams will be Elinor and Marianne; then  Nick Zano (Brandon), Danielle Chuchran (Margaret Dashwood ), Brad Johnson ( Edward Farris ), Jason Celaya ( Willoughby ) . Director , Brian Brough.
GIVEAWAY WINNER

C. Allyn Pierson has kindly been my guest on "Talking Jane Austen" for two weeks and has given away two autographed copies of her latest publication: Mr Darcy's Little Sister", a new sequel for Pride and Prejudice with Georgiana Darcy as the protagonist.
Have you read our interesting chat?    PART I IS HERE and PART II HERE

Last week SUZAN wond her copy. Let's see who the lucky lady this week is. Random.org has decided it must be number ...1 !!! So CHATTY, congratulations! You are the winner of the second copy. You'll receive the book directly from C. Allyn Pierson with her dedication.  Enjoy reading this new lovely Austen sequel!
I'll wait for you tomorrow, for another session of "Talking Jane Austen". My guest this time, Victoria Connelly. Tomorrow 16th September her new novel, A Weekend with Mr Darcy will be released in the UK.  Stay tuned!!!
Posted by Maria Grazia at 18:23

I completely agree. Rupert Everett is one of my personal favourites but he never came close to the unbelievable Mr. Darcy played by Colin Firth. The only man who can make me doubt about the decision would be Richard Armitage. I'm still hoping for a brand-new version of Emma with him as Mr. Knightley. Oh, my Gosh!

About that new version of S&S, well just one more for the road. We'll see. My fav Brandon is still Alan Rickman soooooo....

@Lauriya -- Pretty much ditto to everything you just said! :)

mmmmm....Mr. Darcy (as played by Colin Firth) how do I love thee, let me count the ways...