Our guest today on" Talking Jane Austen" is again author C.Allyn Pierson for part II of my interview. Today I'm going to announce the name of the first winner of her MR DARCY'S LITTLE SISTER and a second giveaway will be launched ending next Wednesday 15th September.
"And This Our Life, Chronicles of the Darcy Family" was C. Allyn Pierson 's first sequel of Pride and Prejudice. It has been purchased by Sourcebooks and a revised version was released yesterday, September 1. It's titled "Mr. Darcy's Little Sister." This revised version concentrates on Georgiana Darcy's story and, in addition, contains an exciting new plot line. The original "ATOL" will still be available until January 1, 2010, when it will be withdrawn from circulation. "Mr. Darcy's Little Sister" is available for preorder now on http://www.amazon.com/ and http://www.barnesandnoble.com./ But if you are lucky enough, you can win one of the autographed copies here on My Jane Austen Book Club, leaving your comments and e-mail address . 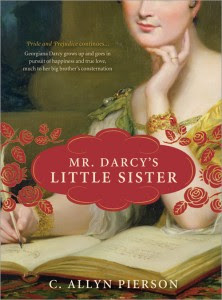 Well Carey, where did we stop? Yes! You were talking about being a teenager at Jane Austen's time, since Georgiana is a teenager. Now, Wickham. Wickham and his attempt to seduce and elope with her undermined Georgiana’s self-confidence. How do you cope with this part of her back story in your novel?
Georgiana, not knowing whether Elizabeth knows about Wickham, tells her about the episode and they discuss it and the fact that Wickham also took advantage of Lydia. The revelation that she was not the only one to be victimized by Wickham made her feel much less stupid and naïve.
Darcy and Elizabeth are main characters in your novel as a married couple. How do you see them in their married life?
I think that the first year of their marriage is very easy and carefree because they have already had their struggles in Pride and Prejudice. I think as time goes on they may develop some of the same problems that all relationships have- after the novelty has worn off. No relationship is totally carefree, but I think that their deep love for each other will make them fight to hold together their relationship.
Now it’s playtime! If you had the chance to get lost in one of JA’s novels, which one would you choose?
Pride and Prejudice, definitely (preferably with Colin Firth)

As a period drama addict I must ask you about Austen adaptations.What do you think of the many we’ve had so far? Have you got any faves?
The 1995 P&P with Colin Firth and Jennifer Ehle, Emma with Gwyneth Paltrow, Persuasion with Ciaran Hinds. The last I have a couple of reservations on- they depict Anne as showing much more emotion than she does in the book- she is very repressed. Also they show them kissing in public-scandalous! The P&P with Keira Knightley I thought was terrible. It had beautiful cinematography, but Elizabeth was portrayed as snippy and smart-mouthed and Darcy didn’t look arrogant- he just looked depressed. Also they made some ridiculous changes- such as having Lady Catherine show up at the Bennet house in the middle of the night and the Bennets were all in their nightclothes! This in an era where not only would you not show up in the middle of the night, but calling on people was actually prescribed at certain times: you called between 1pm and about 5 and the better you know the people you are visiting, the later you are allowed to call, so new acquaintances called near 1pm and family members and close friends might call at 4pm.
As usual , when I get to this point of my interviews, I like playing the “casting game”. Imagine you were contacted to sell the rights of your novel for a film. Would you accept? Who would you cast in the main roles?
I would definitely like to see my book in film and I understand that some changes might be required, but I would like to keep veto control of the final script. As far as casting, I am afraid I am not a good judge of that. The people I like in previous JA films are too old to play the characters again. It must be someone who can do period work, and not everyone can. I probably would like to find relative unknowns for the roles- people would not be typecast but could be a fresh face. There are a lot of excellent actors and actresses who are on the stage or in repertory.
I read on your site that you are working on two additional sequels to “Pride & Prejudice”. Can you reveal anything about them?
The sequels are subject to approval by Sourcebooks- they have first option on the next book. That said, I would like the second book to take up Darcy and Elizabeth’s marriage again and they will have some setbacks and they must learn to live their lives without fear. This is a subject that is close to my heart because in my work I sometimes see people who are so worried about getting cancer, or getting sick, or their kids getting killed in a car accident, or whatever, that they don’t live their life. I don’t want to get to the end of my life and feel that I had wasted it worrying about something that never happened. In my third JA book I would like to take up Darcy’s cousin Anne and her marriage to Fitzwilliam’s ne’er-do-well elder brother. A lot of pain and passion in both of these!
Now my final question. Why should a Janeite buy / read your “Mr Darcy’s Little Sister”?
Hmmmmm. Because they love Jane Austen and want to see if my story fits with how they see the future of these charaters. Also, those who read And This Our Life will probably enjoy seeing how I have changed the story. One of the interesting things about these JA sequels is comparing the different authors’ visions of the future. This is not a case where if you have read one you are done. Readers who enjoy the sequels can enjoy many different versions. 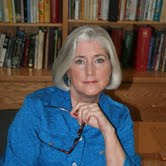 Thanks Carey for being so kind again! Good luck to you and your new brave Georgiana!
You can follow C. Allyn Pierson on her site or
on the brand new Austen Authors Blog!

Ready for the name of the 1st lucky winner?

SUZAN !!!
CONGRATULATIONS
Try to be as lucky as Suzan, leave your comment and e-mail address. There's another signed copy of MR DARCY'S LITTLE SISTER for you!!!
Remember! This new giveaway ends 15th September.
Posted by Maria Grazia at 15:40

JA fans love all things Austen. Loved first book and will be taking the 2nd book with me on vacation next week. I might start it earlier trying to hold my self off though. The first book was awesome, I read it several times waiting for this book. Loved how you gave Darcy a title. (yeaaa) charlene
chatty1082@aol.com

Congrats Susan. Hope I will get lucky this time around!

Love Darcy and his sister,

I have just discovered this site and I have already found lot to learn and enjoy. I hope I win a copy of the book!!!
M Beatrice
maribea@tiscali.it

I loved the interview. What never ceases to amaze me is that the women of Jane Austen's time were such young wives and lovers. What enormous pressure there must have been for the 25 year old or the 27 year old. Imagine if you were 30 and unmarried! Carrie and the girls in New York have NO IDEA! Let alone on the correct etiquette and how to behave.

I would love to win an autographed copy.
Many thanks, Carey and MG.
pruebatten@netspace.net.au

stared the book on vaca. love it.

This was a very interesting interview. I was surprised to know that there were such stringent restrictions regarding visiting times, I guess the Kiera Knightly movie took liberties there although I do love that movie the best.

Congrats Suzan on winning the book.

Please enter me. I would love to win this book.

Wow I couldn't believe it was me! I am amazed, stunned and so happy to have won the book. Please accept my apologies for taking so long to reach you I haven't been able to log onto my account/computer due to issues. I tried to send an e-mail but I'm not sure you received it. I loved the interview with Ms. Pierson it was so interesting.

I have to admit I'm one of those who loves to read the variations/sequels of Jane Austen's novels and I would love to read this one.