Today, thanks to Laurel Ann @ Austenprose 's post on facebook, I've read this very interesting article by Lev Raphael from The Huffington Post. These are the most relevant ideas: 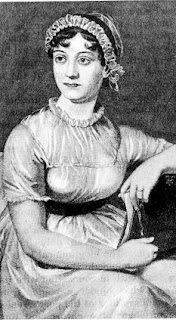 "Given Austen's ubiquity, and the fact that anything with her name on it will sell, you might think she's always been a sensation. But you'd be wrong, as Jodi Picoult was when she recently said the New York Times needed to review popular authors because
"historically the books that have persevered in our culture and in our memories and our hearts were not the literary fiction of the day, but the popular fiction of the day. Think about Jane Austen. Think about Charles Dickens. Think about Shakespeare. They were popular authors. They were writing for the masses".
Not at all. Austen's fame and popularity grew long after her death, but during her life she was only moderately successful, and novels weren't even the most popular genre in her era.
Back then, novels were less widely read than poetry by celebrity authors like Sir Walter Scott and Byron. The day it was published in 1814, Byron's The Corsair sold 10,000 copies. Also published in 1814, Emma took six months to sell out its printing of 1250 copies.
And when Scott turned to historical fiction in 1814 with Waverly, he became an instant success in this genre, thanks to his poetry. He sold far better than Austen ever did in her lifetime. Given his status as 800-pound gorilla on the literary scene, it's not surprising Austen made fun of their different levels of success in a letter to her niece Anna: 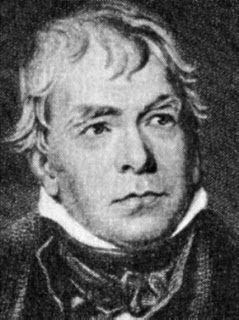 "Walter Scott has no business to write novels, especially good ones. - It is not fair. - He has Fame & Profit enough as a Poet, and should not be taking the bread out of other people's mouths. - I do not like him, & do not mean to like Waverley if I can help it - but fear I must..."
So who did read Austen? She was a special favorite of the fashionable set who enjoyed guessing at her identity because her first four books were published anonymously. Aristocrats ranging from the future wife of Byron all the way to the dissolute Prince Regent and his beloved daughter Charlotte admired her work. The royal librarian even gave Austen a tour of the Prince's ornate London residence, telling her that his master kept copies of her books in all his homes.
When she died in 1817, Austen was more than fifty years away from the idolatry and burgeoning sales of her first great boom (the second came in the 1990s, thanks in part to Colin Firth's Darcy". (Lev Raphael) 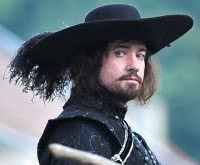 Just few days ago we were  thinking about what Darcy Macfadyen was up to. The answer was he was shooting two different films, do you remember? If you don't , read last week Austenesque News. Are you ready to watch him like this?
As Athos in The Musketeers? Not bad!
They are shooting in Bamberg, Germany,  these days but Matthew is not yet there.
Have a look at this link
3. SEX AND THE AUSTEN GIRL'S ... WEDDING DRESS

After a period of holidays, the online comedy inspired to Laurie Viera Rigler's Austen Addict novels is back with the 13th episode: Sex and The Austen Girl - Wedding Dress

"It's bad enough to be stranded in Regency England while another woman takes over your life. Even worse that she's wearing your wedding dress. The one you hid in the back of your closet. The one from the wedding that never took place. Watch our time-swapping heroines clash over what it means to be dressed in white.
Ah. If only it were as simple today as it was in Jane Austen's time...
4. AUSTEN AUTHORS SUCCESSFUL LAUNCH

Have you read the first part of TALKING JANE AUSTEN with C. ALLYN PIERSON? Tomorrow I'm going to post Part II , to reveal the name of the first winner of her MR DARCY'S LITTLE SISTER  and to launch a second internationally open giveaway! So check My Jane Austen Book Club tomorrow and, if you are not the lucky winner, never mind! You may read part II of my interview, leave your comment and try again!
I've just received my lovely copy of Carey's novel and I'm going to review it soon on this blog.
Next Thursday 16th September, on occasion of the release of her new novel in the UK, A WEEKEND WITH MR DARCY, Victoria Connelly will be my guest to Talk Jane Austen with me. Don't miss her lovely interview!
Posted by Maria Grazia at 23:44

Loved the article about Austen's fame! Very interesting -- it makes me wonder what 'forgotten' authors from our times will be gigantic successes in the future!

They are shooting The Musketters at the moment in my home town (würzburg), but all the fuss is about Orlando Bloom. Now that he has left, I hope one can get some bits of information about the other actors, especially MacFadyen. ;-)