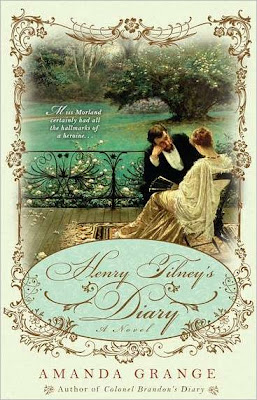 A lovely page-turner, a charming re-telling of  Northanger Abbey focusing on Henry Tilney and on his personal vision of the events  we loved reading  in Jane Austen’s  amusing tale of Catherine Morland’s adventures.
In Amanda Grange’s Herny Tilney’s Diary we meet a very young hero - almost 16 at the beginning - writing about his careless holidays back home from school, his older brother Frederick’s bravado, his special bond with his sister  Eleanor, his mother’s frail health, his father’s strong temper  and authoritative grasp on his own family.  On the whole,  a happy picture, especially because Henry is a very sensitive, humorous, witty boy who loves dearly his family and life  itself. He is destined  to become a clergyman and is  in search for his heroine. What is the characteristic he can’t renounce? She must love Gothic tales as much as he does.
During a trip to Bath,  Henry meets  Catherine Morland, who not only loves reading Gothic novels but even believes them true accounts of possible realities. She is also innocent, honest, sincere, lovely and cute so Henry starts believing he may have found his heroine, even if she is not in possession of a great fortune.

What does he love in her? In his diary he writes:

“Miss Morland was not jaded by her surroundings, nor did she pretend to be. It was entertaining to see how much she enjoyed the bustle, the rooms, the  people and the dancing, instead of affecting boredom, like the other young ladies, saying that there was not one interesting person to be met with in the whole of Bath. Instead, she was charmed, and through her eyes I found that some of the charm of Bath was restored for me”

General Tilney, Henry’s father, is instead in search for wealthy partners for all his children. His stubborness makes life hard for Eleanor,  for example, since she is supposed to marry a marquis or a viscount but is in love with humble Mr Morris. So why is the General eager to make penniless Miss Morland the perfect match for his younger son, Henry? That’s really unexpected  -  if not unbelievable - to Eleanor and Henry , who both like Catherine very much and are really  hopeful their father is going mild in his old age. They are terribly wrong, unfortunately.

If you love the irony and wit in  Northanger Abbey ,  you will obviously  enjoy this amusing re-telling from a different perspective. Henry is such a brilliant hero and through his diary  we can know about the young Tilneys’  early lives and the events that shaped them and, moreover,   we can follow his innermost thoughts and feelings at meeting his “in-training” heroine.
As a tender, thoughtful knight  he will  rescue Catherine,  like the sensitive, brave hero of the Gothic tales he loves . But not from a devilish villain , he saves her   from her imagination, inexperience and naivety which might have  led her to an uncertain  future or to a very negative epilogue (something similar to that of Isabella Thorpe?)