Rebecca Jamison met her husband on a blind date. His first words to her were, "Do you want to get together and play spin the bottle?"(He was trying to avoid another bad blind date, but she went out with him anyway.) Rebecca grew up in Vienna, Virginia. She attended Brigham Young University, earning a BA and MA in English. In between college and grad school, she served a mission to Portugal and the Cape Verde islands. Rebecca and her husband have six children. She enjoys running, dancing, making jewelry, reading, and watching chick flicks. You can learn more about her at www.rebeccahjamison.com

Jane Austen knew all about big break-ups.  When Jane was twenty-six, she received a proposal from twenty-one-year-old Harris Bigg Wither, her friends’ younger brother.  Although Jane accepted Harris’s proposal at first, she quickly regretted her decision and told him the next morning that she couldn’t marry him after all.  It was definitely a brave move for her time. 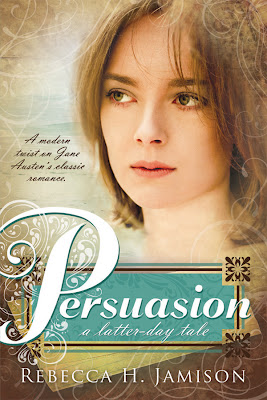 Harris was no Captain Wentworth.  He was probably more of a Mr. Collins or worse.  Jane described him as having a “bad habit of body.”  Others wrote that he stuttered and was uncouth.  Though he was wealthier than Jane, he was no match for her intellect.

Jane Austen’s broken engagement was an embarrassing memory for her.  Still, she was bold enough to write Persuasion, a book that revolves around a broken engagement—an engagement that’s strikingly similar to her own.  Perhaps Jane was comfortable telling the story because Anne Elliot’s feelings were so different.  Anne refused Captain Wentworth because her family disapproved of his economic situation, not because she didn’t love him.  While Jane Austen refused to marry for security without love, Anne Elliot refused to marry for love without security.

I’m a huge fan of Persuasion.  After the first time I read it, I went right back to Chapter One and read the whole thing again.  Then I read it two more times.  I loved the strong emotions, moments of misunderstanding and beautiful descriptions.  At the same time, I realized that many modern readers wouldn’t have the patience for Persuasion because it’s not as lively as Pride and Prejudice.  Modernizing Persuasion was a fun way for me to relive my favorite novel over and over again.

When I started writing, I thought so many of Persuasion’s themes jived with Mormon or Latter-day Saint culture, so I made the characters members of the Church of Jesus Christ of Latter-day Saints—hence the subtitle, “A Latter-day Tale.”  Latter-day Saints place a lot of emphasis on the importance of marriage and tend to marry at younger ages than the general population.  This helped explain why the modern Captain Wentworth would be so anxious to propose.

People are still afraid of committing to marriage today, even though the reasons are a little different than they were for Jane Austen.  Why is the modern Anne afraid of getting married? For one thing, she has a lot conflict within her family.  Her parents are divorced, and like many children of divorced parents, Anne wonders if she’ll be able to have a successful marriage herself.  Another thing that worries Anne is Captain Wentworth’s choice of profession.  He wants to be a police officer, and Anne worries she won’t be able to withstand the stress.  As in the original story, Anne’s parents persuade her to refuse Captain Wentworth’s proposal.

Anne lives to regret her decision.  We’ll probably always wonder whether Jane Austen ever regretted hers.  I’m guessing she didn’t.  What do you think?


Leave your comments + e-mail address to get the chance to win either
1 paperback copy for US residents
or
1 e-book copy for readers from the rest of the world
This giveaway contest ends on February 27th when the names of the winners are announced.


When Anne broke off her engagement seven years ago, she thought she’d never see Neil Wentworth again. But when Neil’s brother buys the house she grew up in, it seems fate has other plans in store. Anne is unprepared for the roller coaster of emotions that come when Neil returns and starts dating her younger friend.


Convinced that Neil could no longer have strong feelings for her, Anne pushes away all thoughts of the past. But when the handsome man she’s been dating decides he can’t live without her, Anne must come to terms with her past.

Fans of Jane Austen’s Persuasion will enjoy this modern version of her most romantic story.

This sounds like a really interesting twist--I'd love to read it!
Thanks for the giveaway! :)
araminta18 at gmail dot com

I would love to win the print copy of this book. Sounds like a great story.
lcbrower40(at)gmail(dot)com

Thanks for having me on your blog, Maria.

You are most welcome, Rebecca!
Thanks for your lovely guespost. By the way, I'm sure Jane never regretted her rejection of a marriage of convenience. I'm not so sure she was never in love though, and that she would have accepted to marry her Wentworth or even her Edward Ferrars for affection.

Interesting! Thanks for the opportunity to win a copy. :)

Interesting! Thanks for the opportunity to win a copy. :) I doubt Jane Austen regretted her decision.

Thanks for the giveaway! I never knew Jane was proposed to!

I want to win this book so bad! Thanks for the giveaway!
lexie.bookbug at gmail dot com

Yay! I would love to enter for the paperback ssandmoen@yahoo.com

Sounds great! Thanks for the chance to win!
alyssamaria1@hotmail.com

I'm totally going to buy it Becky if I don't win. Can't wait to read it. I haven't read Persuasion, and Annette told me to read your book first before I read Jane Austin's. I'm excited. kidsntow @ q . com

wow a spin off of persuasion. there are alot on p&p, s&s. im glad to see there are a few on her other stories.
i loved persuasion i would really love to read this story.

Oh, dear, I'm so anxious to read this new turn of phrase on my favorite, "Persuasion." Captain Wentworth is my favorite of the Austen men...though Darcy is so dear to my heart. I always wonder if I wouldn't have fallen in love with Wentworth because he had such a faithful heart. I'm very interested in the Latter Day Saints angle of this Austen book. Do I think Jane ever regretted her decision to turn her suitor down? We all have regrets, don't we? I'm sure she thought about it over the years. But, we'll never really know. People and circumstances change. It makes one wonder how that younger brother of her friend's may have matured and reshaped himself as the years went by. Was he the model for Cpt. Wentworth?
Deborah/TheBookishDame
thebookishdame@aol.com

Thanks for the giveaway! I fell in love with Persuasion in 2011 and would love to read this retelling!

I would love to read this! Sounds wonderful, putting a new setting to one of my favorites!

I love "Persuasion" very much and I love the sound of your book. As for your question, I don't think that Jane regretted not marrying him or not marrying at all for that matter. I think of her as someone very content with her life and the choices she made. Choices that, I think, are much better understood nowadays than in Jane's time.

This sounds like an interesting adaptation. I would love to read it! thank you for the giveaway!

This retelling of one of my favorite Austen novels sounds amazing! I can't wait to read it.

Thanks for hosting this wonderful giveaway!

A modern Persuasion twist. Sounds interesting. Thank you for the giveaway!
cherringtonmb(at)sbcglobal(dot)net (US)

Thanks! I really want to read this book!

I just read Persuasion for the first time and liked it very well. This moden twist sounds like a fun way to revisit the story.

Please enter me for the giveaway.

Thank you Maria and Rebecca! Sounds like a wonderful adaptation!

I live in Australia

This book sounds wonderful I love Persuasion and am alway looking for sequels or modern adaptions, very exciting!

I live in Austria, Europe.

Great post! I love Persuasion and this modern retelling sounds very interesting! Thanks for the giveaway!=)
I am in the US.
kellik115@yahoo.com

I love Persuasion! It's one of my favorite Austen stories.

It's interesting that this Persuasion retelling is set with characters who are part of the LDS church. I remember the P&P movie which was set within the same church as well.