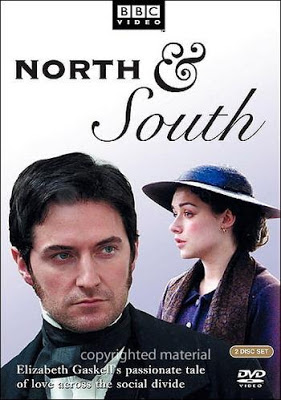 If you are an Austen fan and you crave more “Austen” then I am here to recommend a couple other movies you might enjoy. While nothing can replace our favorites like Pride and Prejudice or Sense and Sensibility I have found a couple movies in the past which have not disappointed. You have to be a certain type of individual to like these kinds of movies: the English made or dramatic movies which move a little slower and add a lot of extra detail. This is what I love and crave and if you are of the same mind then I want to recommend what I consider a beautifully made movie that any Austen fan would love.

That movie is called North and South, written by Elizabeth Gaskell in 1855. It was a made for television movie in 2004 by the BBC. I had not seen this movie until a couple of years ago when I started watching other BBC shows and ran across this one. It was considered an industrial novel when it was written; it was written about relations between employers and workers of that time period.

This movie deals with multiple relationship scenarios from the employer, played extremely well by Richard Armitage as John Thorton, his devoted and sometimes overbearing mother, and individual workers and their plights in life. But the greatest relationship is between John Thorton and Margaret Hale, played by Daniela Denby-Ashe, who was one of 19th century literature’s original heroines. 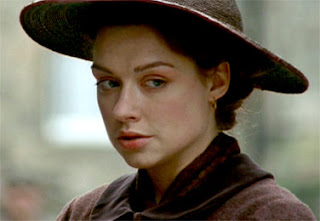 This movie is set in Victorian England’s industrial north which is a far cry from where Margaret came from in the south. She was used to privilege as a middle class southerner but was forced to move to the north because her father gave up his position in the church because he disagreed with some new theology of the church.

Margaret is immediately offended by Milton, the town they had chosen to live in. It is dirty, noisy, and in her opinion it lacks civilization. She blames moving to this place as the reason why her mother’s health is on the decline. She is particularly offended with the handsome and charismatic John Thorton who at their very first meeting was beating one of his workers- which she stepped in and tried to stop. He epitomizes everything she hates about . 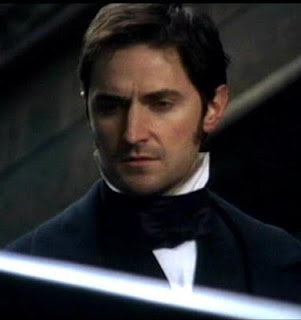 The cotton mills are horrific reminders of the suffering that was done in that day and age by those who were not blessed with positions and privilege. The workers inhaled the cotton that was flowing about the mill like snow and most were dead at a very early age. There are very touching scenes between Margaret and a mill worker close to her own age that she befriended. Just to watch scenes from what must have gone on at that time makes a great impression.

Throughout the entire movie you can feel the repressed physical attraction these two have for each other and as in Pride and Prejudice there is an offer of marriage that is not well received by Margaret from Mr. Thorton. This elevates the tension between them as does the labor strike and the ties she has made with some of the local cotton mill workers. She is trying to help the poverty stricken mill workers and becomes quite close to them. The mill workers put into effect a strike which places her in the center of the fight between management and labor. Which as you can imagine puts even more strain on her relationship to Mr. Thornton and his overbearing mother who senses his affection for Margaret and would like to keep him all to herself. She believes Margaret has shown multiple instances of impropriety and is not shy about sharing these feelings with her son or with Margaret on many occasions.

I will not even attempt to let you in on the end of this wonderful tale of class differences, circumstances, and prejudice that Margaret and Mr. Thornton have to overcome. If you watch this movie and you are anything like me you will have to rewind and watch the end of this movie several times. They never make the best parts long enough. It is much like every English movie in that it takes its time and fills you with all the details and background of the times and characters in this industrial time in . These movies are too slow for some but I savor each moment in this wonderful drama. I love the costumes, the background, the sounds, and all the details that come from that time in ’s history. This is a must see for Austen fans in my opinion. 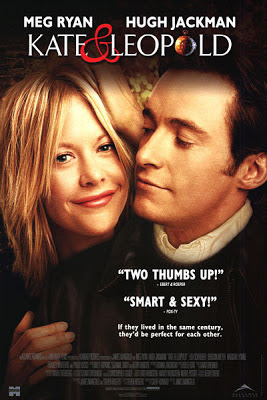 Another movie from 2001 that I am very fond of which is set in the past and in modern times is Kate and Leopold with Hugh Jackman and Meg Ryan. Kate (Meg) lives in an apartment in in the 21st Century with her brother Charlie who is an actor. Meg’s ex-boyfriend, Stuart, who lives above her apartment and who is a bit eccentric, has discovered there is a spot near the Brooklyn Bridge where there is a gap in time. If you jump off the Brooklyn Bridge at exactly the right time you can go back to the 19th Century. When he arrives in the 19th century he starts taking pictures with his tiny camera (compared to the cameras of the 19th century) and Leopold (Hugh), a man who lives in the 1870’s sees him and follows him. He ends up following Stuart back through the gap in time to the present.

Leopold is a very proper English duke who is accustomed to being treated as such. Kate’s brother meets him and thinks that he is a fellow actor and is “way deep into his character” which he greatly admires. At the beginning of the movie it implies that Leopold is the inventor of the elevator so when they get back to modern times all the elevators are broken. Stuart subsequently gets hurt in a fallen elevator and Leopold is left alone in Stuart’s apartment. Kate thinks he is crazy but Charlie helps him out because he thinks he is just trying not to come out of the character he is auditioning for. 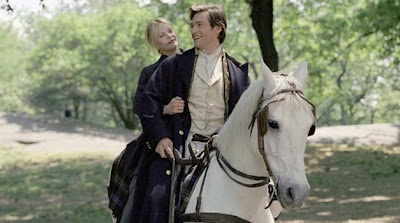 Leopold is a very well educated man and an inventor and tries to learn about and even improve the modern conveniences he comes across. No matter what comes at him he stays a gentleman and eventually impresses Kate even though she still thinks he is crazy. There is a wonderful scene in the movie where Kate’s purse gets snatched and Leopold borrows the horse from the horse and carriage guy in the park. He makes a dynamic rescue and Kate is unmistakably smitten with his valor. They fall for each other but then have a falling out about the same time Stuart comes home from the hospital and tells Leopold it is time to go back to his time or the portal will be closed. After he is gone then Kate notices the elevators working and realizes that it all may be true and that she has lost her love forever. 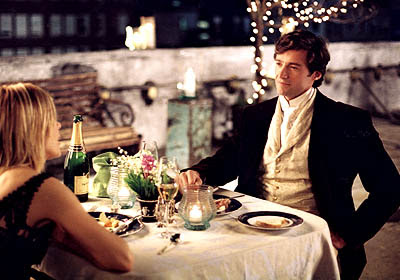 Charlie and Stuart are sitting in the apartment looking at the pictures he took while in the 19th century and realize that there is something there that should not be. They have to find Kate fast before the portal closes and let her know. I will not tell you anymore so as not to spoil it unless you have already guessed. Oh, and I forgot to mention that Leopold is a broke English Duke and that he must marry a rich American by midnight the night he goes back or his Uncle will disown him. So that adds a little more excitement to the end of this flick.

It is not exactly Austen material but Hugh Jackman pulls off the 19th century gentlemen so very well that we might as well be there. He is handsome, charming, and oh so 1870’s that at times you will feel as if you are at least a little closer to an Austen movie! I love it.

I hope that you Austen fans will give North and South and Kate and Leopold a try. I enjoyed them both very much and re-watch them almost as much as my Austen favorites. Another movie that I am sure you are all aware of is The Princess Bride which is a comedy/romance combo but has all the sweet charm, country side, and English accents to set the mood for Austen lovers as well. If you have not tried that one you should give it a watch as well. Enjoy!

Author Byline:
Allison after graduation allows her to combine her two passions: writing and children. She has enjoyed furthering her writing career with www.nannyclassifieds.com .  She can be in touch through e-mail allisonDOTnannyclassifiedsATgmail rest you know.

I love North and South! I liked it so much when I first saw it, it immediately became my favorite movie. Pride and Prejudice (1995) and North and South are my two most favorite period films.

I agree! I enjoyed watching North and South and I love watching Kate and Leopold from time to time.

Both of these movies are good, but North and South is far superior. It is just an amazing movie and the cast is first class. I love, love, love this movie!

I think another movie fans of Austen should try, in this vein, is the version of Jane Eyre with Ruth Wilson and Toby Stephens. He is amazing and so is the movie!

LOVE LOVE LOVE North & South! One of my very favorites.

I also enjoy Kate & Leopold - fun to watch Hugh Jackman as the duke.

I wish more Authors would write variations on N&S. Its my favorite movie. There are a few good ones but not as many as P&P.