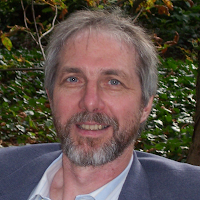 Cornelis De Jong lives in the Netherlands but was born in South Africa. His life might well be the plot of an interesting contemporary novel which I hope Cornelis will write down sooner or later, though I'm not  so sure he wants to.
He is a kind, reserved gentleman with a Calvinist background,  who became a teacher of English after experiencing few totally different careers and, finally, recently came to publishing his first novel : "My Brother and I". It is Cornelis De Jong's very personal  sequel to Jane Austen's "Pride and Prejudice".
I've  had the pleasure to meet him and his wife in Rome lately, following my online interview with him (HERE). On occasion of our meeting , he personally gave me a signed copy of his novel for one of you. Fill in the form below to enter the giveaway contest open worldwide linked to this guestpost  and get your chances to win it.  .  The name of the winner will be announced on 9th November. 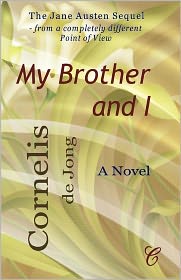 When I was twelve I sat down to write a book. A fresh exercise book in hand, I penned in the title, and the name of the author: me. The title has slipped my mind long ago. Scribble, scribble, scribble – this was fun; but, after a few pages, I stopped. How do you write, he says, she says, and what is said? We had not been taught that (as yet). Besides – my greatest bugbear in life – how do you spell this or that word; or, is there not another word which would better describe what I want to say?
I’m a worrier. Please note the spelling. I am not a warrior. Even I know now that warrior has different letters in it, though it is pronounced the same (well, virtually). I am not complaining: please keep that in mind. I know I should be grateful; the gods had given me a good turn of speed; boy! was I a fine athlete as a kid; and I am as curious as a cat. To be honest, I am more like the Elephant’s Child: ‘full of insatiable curiosity’; besides, elephants remember things: I’m okay on that score too. But I cannot spell. This worried me no end. But it did not worry my teachers in the least; they told me I’m stupid. I shall not tell you what this spelling ‘condition’ is called (God knows, I’ll probably spell it incorrectly); suffice to say that if I were not typing this article in a word processor, it would be a right royal mess!
But what worried me even more were all the many things a writer needs to know and have just to be a writer. I mean, have you ever seen a good carpenter at work? Have you seen his collection of tools; have you seen him at work; have you seen how good he is, how he planes a piece of wood just so, as if it is the easiest thing in the world? I was doomed. I did not even have a dictionary. My teachers were right, so I gave up – more or less. (There was one thing, though, they were not going to bully me out of: I love reading. Hunched forward on my knees on my bed, I read – for hours and hours, with the door closed. Of course, my chores around the house suffered badly and I had to endure many a clip about the head for my silly obsession.)
Like the ’satiable Elephant’s Child, I did ask ever so many questions, and I lived in Africa, too. However, I was the one who ended up being spanked more than most for being a lazy pupil. I concur; it is quite true; I did not do my homework, very often. The only homework I ever did with relish was writing essays. I did not mind getting bad marks for my essays: give me a topic and I would rattle off a story in no time. They were invariably returned dripping red as my teacher had put his dreaded red pen to work on my little creations. All very disheartening; that is, until I met this teacher in the fifth form who had the habit of handing back our essays in class announcing the scores as he went along: ‘de Jong, 95,’ as casual as you like (we worked in percentages, in case you are wondering), which really got the class to stare. What? You! Yes, madness. Not only were the margins red (he used codes for errors: sp for spelling; well, I’ll spare you the rest), but he used to rewrite most of my essays (also in red) at the end. ‘You should send this to a magazine,’ he said to me once. Joke. That one was redder than any I had written before.
Fast Forward in Time...
The first time I ever laid eyes on a laptop computer, my heart leapt! This is it. In the in-between years I had written many short stories – for fun; nothing ever published. But the hassle remained; so much checking to be done. (Fair enough, over the years I had learnt hundreds of mnemonics to help me spell, but they still popped up – those pesky errors.) A desktop computer did not do it for me; so, as soon as I could, I got a laptop: you will not believe what I have installed – dictionaries, thesauruses and collocations. Marvellous! Meanwhile, because I had had difficulty finding work (I have an engineering diploma), someone suggested I try getting a teaching diploma. Indeed, this was another of those seminal moments which is a story in itself that ended in a master’s degree six years later. And now I teach English. Another joke; I would have loved to have seen those teachers’ faces – you know the ones I mean, but most of them are either dead or in their dotage.
I’m now going to cheat. I shall quote from something I have written before.

In 2008, while preparing a set of exercises on Jane Austen’s Pride and Prejudice for my students, I planned to conclude the course with a creative writing assignment: rewrite the last chapter, or add a new chapter to the last – to either expand on the given events at the end or to reveal what could conceivably have happened next (or both).
Since it is good practice to require of students only that which you can do yourself, I set about doing the assignment myself. I have been writing short stories for many years now – a discarded novella among them; but, this endeavour soon grew into several chapters. The temptation to write my story to its conclusion was so great that a novel, which I called My Brother and I, was the result. I am rather pleased with the outcome.

Quote, unquote – from the front of My Brother and I published in 2010, by me: officially at corneliswriter.com, printed by CreateSpace and distributed by Amazon. I feel extremely lucky to have fulfilled that naive 12-year-old’s ambition – at last! However, it was rather fortuitous; I could not have foreseen this in my wildest dreams.
Cornelis de Jong (2011)
GIVEAWAY


Fill in the form below. You have from one to four options to enter the giveaway contest. The more options you choose the more chances to win you get. Good luck!

A beautiful, very personal post.
I am looking forward to read your book. I am also curious about what your students wrote as a final or new chapter for P&P. What a good way to end the course!
Monica

This sounds like quite an interesting book. I liked discovering how the author came about writing it. Thanks for the giveaway!

I enjoyed reading of your journey along the path to becoming a writer. The part about reading a great deal is probably the best 'tool' you could have used at the time.

Thank you for the giveaway opportunity.

I presume he suffers from Dyslexia ?

My son does as well.

Thanks for the giveaway and wishing Cornelius well with his book.

sounds like an interesting read!!! already of my WishList!!

Thank you for sharing your journey! My Brother and I is already on my wish list.

It's unfortunate that the teacher who gave you 95% didn't explain that he was marking for content and style rather than on spelling - if you'd understood that your life might have been very different! I look forward to reading your book.

What an intriguing premise for a P&P sequel (I just read the blurb on Amazon). Definitely on my reading list now. Thanks for sharing your persona story, and for the giveaway.

Thank you for sharing something so personal with virtual strangers! I'm very curious now and I'd love to have the chance to read your book!

Thanks for sharing your personal experience with us, Cornelis. You prove that dreams do come true if you try hard enough. I'm curious to know what your book is about.

It sounds like a good read. I wish you all the best in your future writing.

To all of you who have left such nice remarks - I am truly flattered! - thank you very much. I only wish that reading were more popular among young people; something odd is happening to our youth who seem to be developing an aversion to reading (and finding it difficult). However, this obviously does not apply to you. Thank you again.
Regards, Cornelis.

I would love to read the book, and to found out the last chapters your students wrote! Im intrigued! Please give us an excerpt!

It's wonderful when we can fulfill our childish dreams!!
Thank you Cornelis and Maria Grazia for this post!