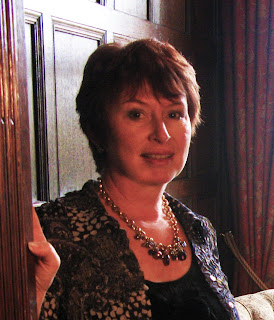 Lindsay Ashford is a British crime novelist and journalist. Her style writing has been compared to that of Vivien Armstrong, Linda Fairstein and Frances Fyfield. Many of her books follow the character of Megan Rhys, an investigative psychologist.
Raised in Wolverhampton, Ashford became the first woman to graduate from Queens' College, Cambridge in its 550 year history. She gained a degree in Criminology. Ashford was then employed as a reporter for the BBC before becoming a freelance journalist, writing for a number of national magazines and newspapers. In 1996, Ashford took a crime writing course run by the Arvon Foundation. Her first book, Frozen, was published by Honno in 2003.
Strange Blood was shortlisted for the 2006 Theakston's Old Peculier Crime Novel of the Year Award. She wrote The Rubber Woman for the Quick Reads series in 2007.
Her latest novel is  The Mysterious Death of Miss Austen.
GIVEAWAY : Read Lindsay Ashford's guestpost, leave your comment + e-mail address and get a chance to win a copy of The Mysterious Death of Miss Austen offered by Honno. Open worldwide, this giveaway ends on 22 November.

The graveyard of St Nicholas’ church in the Hampshire village of Chawton is the burial place of the two women who were closest to Jane Austen. Each named Cassandra, her mother and sister were interred a stone’s throw from the cottage they shared with the novelist. But Jane herself is not there. Her bones lie sixteen miles away beneath a black marble slab in Winchester cathedral. And the mystery of why she died at the age of just forty-one when the two Cassandras lived well into their eighties has never been resolved.
There have been many theories about her death in the two centuries since her last novel was published. Addison’s disease, tuberculosis and lymphoma have all been suggested - but none quite fits the symptoms reported in her letters. To anyone who knows about modern forensics, however, a face that looks ‘black and white and every wrong colour’ rings alarm bells.
Chawton is the quintessential English village – even the cricket pavilion has a thatched roof – and when my partner was offered a job there I went with him, intending to start work on another contemporary crime novel. We moved into a sixteenth-century former dovecote still owned by Jane Austen’s five-times great-nephew, Richard Knight, and I spent the days working in the library of what used to be Chawton Great House, once home to the author’s brother, Edward.  Within a few weeks I’d abandoned the gritty modern novel. Instead my head was stuck in old volumes of the family letters.
The voices of the Austen family were made all the more real by the knowledge that they had passed through the very rooms I now inhabited. Jane herself had slept at the Great House when it was too cold or dark to walk back to the cottage after a family gathering; her brothers, her sister and her parents had all slept there at one time or another and her best friend, Anne Sharp, to whom she wrote one of her last letters, had stayed there too.  The more I read, the more intrigued I became by something the letters and diaries hinted at but didn’t fully explain. I began to wonder if there had been more to hide when Cassandra burnt a large part of her sister’s correspondence than a few sharp remarks. As Jane herself said in Emma, ‘There are secrets in all families, you know’.
Then a fascinating piece of information came my way. It came from a visiting American who had won a short story competition organised by me on behalf of Chawton House Library. She asked if I had seen the lock of Jane Austen’s hair which is on display at the cottage (now a museum) down the road. Then she related the story of the couple who donated it – American collectors of Austen memorabilia, both now deceased, who had bought it at auction at Sotheby’s in 1948. ‘And did you know,’ she said, ‘that before they handed it over to the museum, they had it tested for arsenic?’
I did not know. But the alarm bells that had sounded when I first read Jane’s description of her face during her illness were now deafening. There was arsenic in her hair, which meant that she had ingested poison in the months before her death. No one else in the cottage had been affected, so it couldn’t have been the water supply, the wallpaper or anything else in the house. Was Jane given arsenic as a medical treatment (common enough at the beginning of the nineteenth century) and if so, could the dose have been large enough to kill her? Or was there a more sinister explanation?
Preposterous, you might think. But a few years after her death a wave of paranoia swept England in the wake of an epidemic of arsenic poisoning. The tasteless, odourless white powder could be bought from any grocer’s shop with no questions asked. People were poisoned suddenly, by accident, when it got mistaken for baking powder or talc, and there were also those who were poisoned slowly and deliberately by relatives or servants who knew the symptoms were likely to be taken for disease or infection of the digestive system.
I thought of Jane’s friend, Anne Sharp, who lived well into the middle of the nineteenth century and would have read about the arsenic-phobia in the newspapers. She would also have known about the Marsh Test. Developed in 1836, it enabled the analysis of human remains for the presence of the white powder. What would you do, I wondered, if you suspected your best friend had been poisoned and you were in possession of a lock of her hair?
The Mysterious Death of Miss Austen is the product of all that I have learned and imagined in the three years since I came to live in Chawton. It’s a work of fiction inspired by facts and I hope that those who read it will be both intrigued and fascinated by a possibility which has been overlooked until now.... 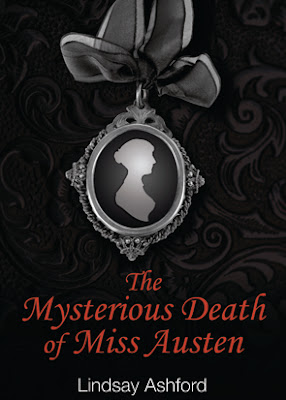 I am first, huzzah! What an intriguing theory. I'd always wondered about the Addison's Disease diagnosis, but it seemed to match up symptoms-wise fairly well. I'd love to get a copy of this book and see her theory. I could also review it on my blog, Yearning for Wonderland: http://yearningforwonderland.blogspot.com

Thanks for writing such interesting posts for Janeites!

An absolutely fascinating post, and theory. I'd love to read this book. Thanks for the giveaway.
lcbrower40(at)gmail(dot)com

I saw Lindsay Ashford speak at the AGM about her book. Fascinating! I had to buy it right then!

This sounds very interesting, indeed! Would love to win it. Thanks for hosting the giveaway. Fingers crossed. elaine489@gmail.com

I suppose we will never be able to ascertain for certain what the cause of Jane's death was, so it is always interesting to come across possible solutions written in novel form.

I would imagine that with the authors past experience it should bee an interesting ead.

A thumping good read for sure! I would hope to win a copy of this fascinating book. THANK YOU FOR THE GIVEAWAY.

I like the idea of Jane Austen combined with a murder mystery.

This is the most interesting Jane inspired novel I've come across. I do not know very much about the circumstances surrounding her death but this is very intriguing indeed!

sounds like an interesting read!! please add me into this giveaway!!!

This sounds extremely fascinating and tragic! That's something that I always wondered about and found very strange: how come that Jane, the most talented of them all, was the only one who died so young? Oh, it's so unfair.

Thanks for the interesting post, Lindsay. I always wonder why JA died at such a young age and not really satisfied with the possible reasons given. The novel sounds intriguing and I hope to win it.

I've heard yesterday of this book and, though I have my doubts on the author's theories, I'd like to read it.

I loved this post, especially because i'm a law student and one of my favorite classes is Criminology. Once you put together Criminology and Austen you make me the happiest person in the world!
It would be amazing to discover an alternative version of Austen's death, so i really want this book!
Kisses,
Tatiana Machado.
machadotatiana@hotmail.com

You've got my attention and I must read this book! Great post! Thanks for the giveaway!

I've always wanted to leave for a literary tour!!! And you live in Jane's village!!! I definetively have to read your book.
Please consider me for this giveaway.
maribea@tiscali.it

I am absolutely intrigues by the premise of this book, and will be reading it one way or another. However, I do find it particularly tragic to think that Jane Austen's life may have been cut so short by unintentional poisoning. Not that being murdered isn't tragic.

Ms. Ashford was interviewed for CBC TV yesterday. Fascinating! I do love her premise, as an obsessed murder mystery reader.

btw, not entering for the giveaway, because I just won one - I will purchase the book.

I think Lindsay Ashford's theory is very intriguing. I really would love to read this book, which has caused havoc even in Italy!

Can't wait to read this book!

I cannot wait to read this book

This sounds so amazing! Thank you for this giveaway!

It is a fantastic idea. I'd love this wonderful and interesting book!

Very interesting! It certainly is a puzzle to me why she did die so young. So tragic and what a loss to her family and to us! Thanks for this giveaway! Looking forward to reading the book even if I don't win that free copy :o)

the review sound greeat, the touch of mistery...the poisoning.
thanks for making this international

This sounds like a very interesting read! My e-mail is kraftyhorselover@hotmail.com Cheers!