PATRICE SARATH, THE ROAD TO “THE UNEXPECTED MISS BENNET” - GUESTPOST AND GIVEAWAY 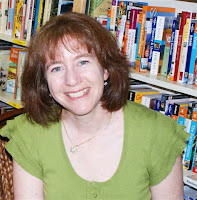 Patrice Sarath is the Austin-Texas based author of The Unexpected Miss Bennet, a sequel to Pride & Prejudice, and two fantasy novels, Gordath Wood and Red Gold Bridge. Patrice’s fascination with Jane Austen began in her early twenties, and she became a voracious reader of all of Austen’s books. She wrote The Unexpected Miss Bennet to answer the question, why didn’t Mary Bennet wed Mr. Collins? They would have been perfect together. The more she delved into Mary’s backstory, the more she realized that Mary Bennet deserved a much better hero, and thus Mr. Aikens galloped into the story.
Giveaway
Read Patrice's piece here below, leave your comment and e-mail address to enter a giveaway of a copy of "The Unexpected Miss Bennet".  This contest is open to US and Canada readers only and ends on November 18th when the winner is announced.


How does an author go from writing novels about modern women having fantastic adventures in a medieval-like world to exploring the highly mannered setting of British middle class society in the late 18th and early 19th centuries? 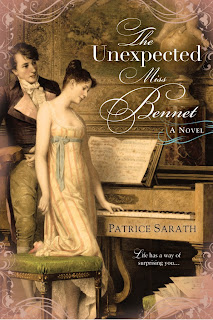 Both Tolkien and Austen had a genius for creating setting, although Austen is mostly known for her character development, her wit, and her social observations. But those very same social observations are setting, as much as Fangorn Forest and Gondor and the Shire. I imbibed her drawing rooms and fine country houses, and ballrooms and card tables just as much as I did Tolkien’s world. So when the time came to create a new project, tackling the question of Mary Bennet came naturally.
I know that most people love the romance plots of Austen’s novels, and certainly the fact that our heroines have their happily ever after is part of the charm of The Six. What I have become most fascinated by, though, is the social life that Austen illustrates. I love how children are such a presence in almost all of her books. I get that she loved children, and may have mourned the fact that by not marrying she was never able to have any. (I do think she was quite the “cool aunt” though, at least as far as her family correspondence shows).
Family is hugely important to Austen, and we see that in Pride & Prejudice, in which Austen takes pains to tell us who is related to whom (the silly aunts on MrsBennet’s side! The wise and stable Gardners!). We see it as well in Persuasion, which has some of the best writing about society and manners and family expectations and the little irritations that rub us the wrong way of any novel, even compared to such writers as Ann Tyler.
So when I read and reread Austen, I’m not reading for the romance, but for her depiction of this world that is as exotic to me as Middle Earth, and as familiar to me as my own family around the Thanksgiving table. She creates a fantastical world with rules of engagement, as the best kind of fantasy does. (Side note: Real fantasy doesn’t make magic systems up as it goes along, but uses magic rules to constrain the plot and make the story more realistic.)
When I wrote about Mary Bennet, I wanted to capture as much of that world as of the world in my novels Gordath Wood and Red Gold Bridge. (By the way, this is why I love portal novels, also known as “wardrobe” novels. What better way to enjoy a fantasy than to have a person like you having adventures in this cool fantasy world?)
So I read Austen’s books for setting as well as books about the history of the era and researched clothing, underwear, etc. I even read Fordyce’s Sermons. By the time Austen was writing, Fordyce was kind of old-fashioned even then, and let me tell you, he’s a hoot. Quoting from Fordyce in “The Unexpected Miss Bennet” was so much fun because I could really get into Mary’s head, both when she agreed with Fordyce and when she went, “wait a minute…”
I knew going in that I wanted a killer opening line that would tell readers exactly what I was doing without trying to “out-Jane” Austen. So as my last word, I will leave it to you to decide whether I’ve succeeded or not. I do hope you enjoy “The Unexpected Miss Bennet” and that it takes you to a world that is both foreign and familiar. And with that, the beginning:


“It is a comforting belief among much of society, that a plain girl with a small fortune must have no more interest in matrimony than matrimony has in her.”

Splendid comments on the use of fantasy and the connection between Tolkin and Austen. I would cherish the opportunity to read about Miss Bennet in this frame of reference. Lovely cover!

I enjoyed your explanation of how you 'got into Mary Bennet's head' by doing things like reading Fordyce's.
I can't wait to see the quotes.

I love your cover and that opening liner about a plain girl and matrimony- very cool.

Thank you for the giveaway opportunity.

I love the opening line of the story! You have got my attention and I can't wait to read it now!=)
Thanks for the giveaway!

I have always felt there was more to Mary's story than was addressed in the original book/movies. I would love a chance to explore her story with your book!

Interesting post. I would love to read your book, because I have a soft spot for Mary. Thanks for the giveaway.
marlenebreakfield(at)yahoo(dot)com

sounds like another awesome read to add to my WishList!!!

This sounds like a wonderful read. Thanks for doing the giveaway.
Ann
cozyintexas@yahoo.com

What fun it will be to read a novel about Mary. Thanks for the giveaway.
lcbrower40(at)gmail(dot)com

So, there's more to Mary than meets the eye!
ljldml@gmail.com