Happy Sunday, everyone! New post , new guest on our online Austen Club. Lesley-Anne McLeod has been writing for thirty years; she has available, in e-book format, eight Regency romances, and five Regency novelettes.  She has also been published in short non-fiction, and has free-lanced in business writing.  Fiction writing is her first love however, and regency romance is her genre of choice. Lesley-Anne is a devoted Anglophile and is committed to historical research and to gardening!
Read her guestpost, join me and welcome her on My Jane Austen Book Club, and finally enter the giveaway at the bottom of the post if you wish!

My love of Regency England all came about because of Jane Austen--specifically because of the dramatizations of her works on television beginning some years ago.
I am a history buff; historical fiction and non-fiction are my preferred reading materials. I watch every historical documentary and drama on television. I have, in my life, gone through love affairs with the history of Egypt, that of Elizabethan England, of the American West, of Victorian England and Edwardian England.


When I came to Jane Austen, I did not at first realize the uniqueness of the period during which she lived and wrote. And I did not equate Austen's world with the eras in which Georgette Heyer set her stories. (I had been reading Georgette Heyer since high school.)  But gradually I came to an understanding of the Georgian era, and from thence to a passion for the world of the Regency period.

The Regency world--Jane Austen's world--saw the last of the long history of mankind unrecorded by the stark reality of photography. It was the last era before the advent of the railroads which changed the world. The early 1800's saw the final great days of the sailing ships before the introduction of steamships. And the era saw the end of the agricultural dominance of man's existence. 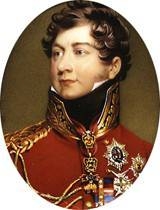 The Regency of George Augustus Frederick, Prince of Wales, technically lasted only from 1811 to 1820. For design and stylistic purposes, it is often extended to 1837. For fictional purposes, it tends to run from 1800 to 1820. Historically it has been likened to the Empire period of France, from 1795 to 1820.

Jane Austen lived in remarkable times--from the French Revolution to the Battle of Waterloo. Photography was just around the corner, and yet we have no reliably attributed portrait of Jane Austen's face. Railways were poised to alter the face of the world by easing travel within Britain and abroad, and yet she never travelled upon one. Her brothers were captains of sailing vessels at the time of the great ascendancy of British sea power, but steam ships were beginning to ply the waters of the country. Jane enjoyed the peace of the agricultural way of life that had formed English society for two thousand years, but the Industrial Revolution was already changing the face of the English countryside, and of English towns and cities. From fashion to architecture, from literature to art, the Regency period of Jane Austen has its own unique look. Its society had one foot in Georgian excess, and one in Victorian prudery. The Hellfire Club lived next door to the Society for the Suppression of Vice.
Jane Austen's world is a unique wedge of history, immortalized by her wonderful books. It is ironic that I am fascinated by the Regency world in all its details, when Jane Austen seldom mentions any of those facts. She never mentions the war raging in Europe, her characters are apparently unaware of the industrialization shortly to overtake them. The revolution of steam travel does not touch her people--they travel by coach, horse, and foot.

There is no doubt that Austen herself was aware of the world around her and its imminent change. But her characters live in the world of the family, the village and the heart--and are loved because of it. The trappings of the greater world do not impinge on Jane Austen's books. But I remain immersed in the Regency world, and I continue to read Jane Austen. 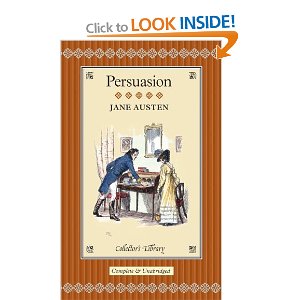 Win a hardcover copy of Jane Austen's PERSUASION with illustrations by Hugh Thomson, Wordsworth Classics, offered to one among all commenters by Lesley- Anne MacLeod. Leave your comment + e-mail address below. The giveaway is open worldwide and ends on November 13th when the winner is announced.
Posted by Maria Grazia at 09:37

Excellent post! Thank you. It described perfectly why I love Jane Austen world so very much.

I did so enjoy this wonderful post; loved the accompanying pictures. The Regency era is a favorite of mine. Thank you so much for the giveaway.
lcbrower40(at)gmail(dot)com

Thanks for the great post. Love the picture of Prinny!

Wow that is a wonderfull post. When I read austen I feel like I'm in the regency period as well and I'm in love. I also love history for my part my favorites are ancient egypt and anxient greek eras as well as victoria but for now my one true love is regency era. Love the post.

I enjoyed your summary of what makes the Regency period unique from the Victorian period after it. I also thought it was interesting when you shared the other historical eras that got your attention earlier as I share three of them too.

Thank you for posting and for the giveaway opportunity.

Love reading the posts on your blog, Peruasion is my favourite Austen novel. The perfect giveaway x mail2kat_s(at)yahoo.co.uk

I have read it of course, but I don't have an illustrated version and would really like that.

Thankss for the giveaway and for opening it to worldwide entries.

thank you for this giveaway!!
i've yet to read Persuasion, tho i have read a variation of one.....

This puts context into Jane Austen's novels. I was sort of attracted to the Regency World myself. Although Austen did not literally mention the ongoing social struggles or changes at that time, I believe she was able to convey it in the way her female characters think and behave.

I love everything that has to do with the Regency world! And Jane Austen books were the ones that encourage me to continue with this passion!

Persuasion is one of my favorite Austen stories and I don't think it gets the attention it deserves.

The Regency era was indeed one of change on the horizon. This essay puts those changes in context. Thank you for the chance to win the lovely copy of Persuasion.

I enjoyed your summary!Thank you for the chance to win the copy of Persuasion. Persuasion is one of my favorite Austen stories! :)

I've just bought a bunch of books by Georgette Heyer so Regency is going to be my favourite period for a long time. Persuasion is also my favourite Austen book, I'd really love to win it in this edition. Thanks for this interview and the giveaway

So lovely reading all these things! All the Jane Austen's universe is so full of enchantment.Thanks for another chance, dear. Kisses, Rachel
rachelwishmade@gmail.com

I have always felt that Persuasion is a bit underrated among others Austen´s novels. However I really like that book!