DEFINITELY NOT MR DARCY BY KAREN DOORNEBOS - MY REVIEW 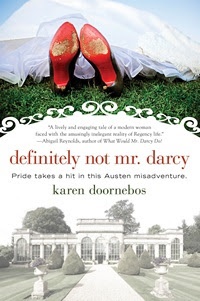 “Maybe you could mix e-mail and etiquette. Business and birdwatching. Nineteenth-century courtship and modern feminism The best of Austen and the worst of our reality” (p. 374)
I have a strong aversion to reality shows, especially those “Big Brother” – style. So I really can’t explain how it is possible that I found Karen Doornebos’s idea of a Regency, Jane Austen-inspired , reality show brilliant. But It just was. Brilliant, I mean. Absolutely, totally brilliant!
“Definitely not Mr Darcy”  is  lively comedy. And a reality TV show results the ideal  setting  for this Austen misadventure in which Pride takes a hit.  Listen to this:  I think I would even watch a show like “ How to Date Mr Darcy” , the one in the book, set in an elegant Regency residence in the countryside,  in which the contestants would have to live just as Jane Austen’s contemporaries used to.
I liked the protagonist a lot. She is funny,  the perfect flawed  (forgive me the oxymoron) heroine we usually find in contemporary comedies. Think of a  Bridget Jones  to figure her out.
Chloe Parker is a  thirty-nine- year old divorced mother. She is a lifelong member of the Jane Austen Society, fond of everything Regency. When her business starts failing, threatening her daughter’s future, she makes up her mind and auditions for a Jane Austen – inspired programme set in England. She thinks it is a documentary in which she will be asked to show her knowledge and competence and is ready to do her best to earn the money they offer her.
But competing with eight women to date and possibly be chosen by Mr Wrightman, the heir of a luxurious estate, is out of question.  Neither for a one-hundred-thousand-dollar prize? Well, in that case …  She can think about it!  Actually, she definitely changes her mind once she meets him:
“It could’ve been a scene right out of a Jane Austen adaptation – tall, dark, and handsome hunk of a man appears in the forest out of nowhere – except, of course, the heroine wouldn’t  be knee – deep in pond water, her stockings hung in a tree” (p.65)
Yes, it is not the best of the beginnings. Moreover, what does Chloe decide to do in that embarrassing, awkward situation? She mistreats Mr Wrightman – just  a gorgeous stranger to her - since propriety wants she doesn’t speak to a man without being first properly introduced. And they hadn’t been!  Fortunately, Mr Wrightman seems rather amused by Chloe’s clumsy, funny ways and decides to discover more about the rich American heiress, Miss Parker (Chloe’s profile in the show).
Chloe is ready to defy the other contestants, all younger  than her. Gloves off , she doesn’t give in to the strictness of the rules:  no cell phones, no indoor plumbing  nor deodorant. Mr Wrightman is a prize worth winning… 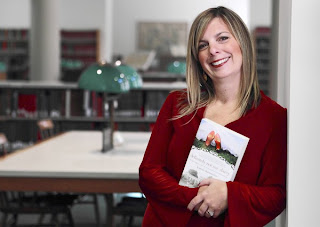 There are all the ingredients of a modern fairy – tale: a Cinderella, two heroes (yes, two handsome “princes”,  rich  Mr Wrightman and his ingenious though  penniless younger brother), a fairy godmother, a witch (she doesn’t do magic but plays wicked tricks on poor Chloe) a dog and a cat. Everything sounds so amusing and entertaining that you speed through the pages longing  for the “…and lived happily ever after” finale.
Actually for Chloe the finale of the show  is a sudden awakening to reality and a sad going back home. She’s really disappointed at discovering that … nothing was what it seemed…
But don’t worry: romance and happy endings are not neglected by an Austenite like Karen Doornebos.
I can't wait to write my questions for her now. She promised to be my guest soon here on My Jane Austen Book Club! Any question to suggest?
Posted by Maria Grazia at 16:52

I really enjoyed this book! It was a fun story to read!!:)

This sounds charming! I loved Lost in Austen, and this appears to be a very different, but equally absorbing tale.

I keep hearing such great things about this book. Thanks for posting your thoughts too.

It looks interesting and easy to go inside. I look book where I can live.

It seems to be funny!!