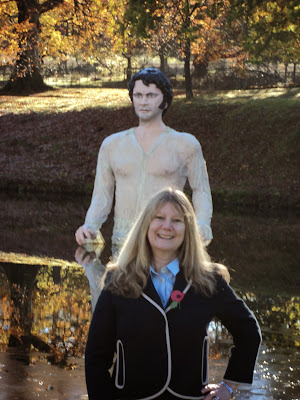 “What would my life have been like without Jane Austen?”

An interesting question! It would have been very different, that much is certain! I first discovered Jane Austen when I was about 13. I used to go to my local library every week and one day I found a book called Pride and Prejudice. I knew nothing about the book, but from page one I was hooked. I loved the witty banter and the characters. As the book progressed, I loved the romance  When it was finished, I couldn’t let Jane Austen go and I read all her other books.
Life moved on. I went to university then I became a teacher, and I often re-read Jane Austen’s novels. I fulfilled my ambition of becoming a published novelist, writing many Regency romances and then, one day, I decided to treat myself to a re-read of Pride and Prejudice. As I read it, I found myself wondering about Mr Darcy. What was he doing when he was off the page? What happened when he his sister was about to elope? How did he persuade Wickham to marry ? And what was he thinking when he made that disastrous first proposal to ?


I started to write a few scenes of Pride and Prejudice from his point of view but I couldn’t’ stop and Mr Darcy’s Diary was born. The rest, as they say, is history. I spent the next seven years of my life writing a whole series of diaries, looking at Jane Austen’s novels from the heroes’ points of view. I came to know Jane Austen’s novels with far more depth and I came to appreciate her skill as a writer even more.
Jane Austen is now woven into my life at every level. I read her books I write my own books based on her novels and I frequently give talks or do book signings at wonderful Jane Austen locations. I’ve been lucky enough to give talks at the in Chawton and I’ve just spent two weekends signing books at , the beautiful National Trust property used as Pemberley in the Colin Firth adaptation of Pride and Prejudice.
My life without Jane Austen would have been pleasant, but with her, it has been truly special. 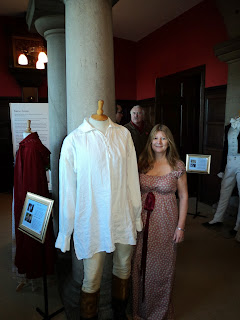 Amanda Grange was born in in the north of . She studied music it and became a teacher before fulfilling her lifelong ambition of becoming a published novelist. She now lives in .
The photo on the left shows Amanda with Mr Darcy’s famous shirt (dry, not wet!) at the Pride and Prejudice exhibition. It is currently on display at , the stately home used as Pemberley in the Colin Firth TV series of Pride and Prejudice.

FREEBIE!!! Until Wednesday 18th December on the Kindle Amanda’s Regency novel “ The Rake” (written under the pseudonym of Amy Watson) is on a free Kindle promotion.

a Rafflecopter giveaway
Posted by Maria Grazia at 15:30

Hi Maria! I'd also be happy to send a free copy of Jane Austen and the Archangel as part of your giveaway-- for that one person who didn't win in the first group!

You can send me a message through my website: PamelaAares.com.

Happy Birthday Jane and happy Holidays to you!

There is so much more to him then meets the eye!!! So Mr Darcy writing diaries makes perfect sense :)

What a lovely story, Amanda! I love your novels and I'm happy Jane Austen inspired your work! Thank you for the freebie!!

Thanks for sharing your story on how Jane Austen inspired you to write novels. If I remember correctly, your Mr Darcy's Diary is the first Austenesque fiction that I read. Since then I have love many of the Austen men diaries especially Captain Wentworth's Diary and Colonel Brandon's Diary.