Without Jane Austen, I would not have gone to Bath to see where Anne Elliot sent subtexts to Captain Wentworth. I would not have learned English country dance to see why being “fond of dancing was a certain step towards falling in love.”And I would never, in a million years, have done so in costume.

Without Jane Austen, I would not understand how children could want the same stories read to them countless times. I would not have believed I would read Persuasiontwenty-five times. And spent nearly as many hours with Austen’s other five novels. For without Jane Austen, I would never have experienced the deeply satisfying and always novel glimpses into her ever-unfolding brilliance. 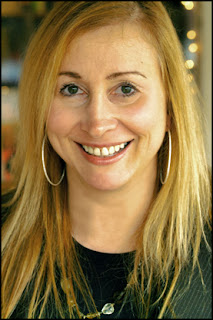 Laurie Viera Rigler’s novels Confessions of a Jane Austen Addict and Rude Awakenings of a Jane Austen Addict (Plume US / Bloomsbury UK) could have been considered semi-autobiographical had they not involved time travel and body switching. Her short story Intolerable Stupidity, in which Mr. Darcy brings charges against all the writers of Pride and Prejudice sequels, spin-offs, and retellings, appears in the anthology Jane Austen Made Me Do It (Ballantine). In addition to having three more novels in the works, including the third in her Austen Addict series, Laurie is the creator of the web series Sex and the Austen Girl, all 23 episodes of which can be found on her online home, janeaustenaddict.com. A longtime resident of the very same Echo Park / Silverlake neighborhood in Los Angeles in which Rude Awakenings of a Jane Austen Addict is set, Laurie now lives nearby in Pasadena, California with her filmmaker husband and their cat.

a Rafflecopter giveaway
Posted by Maria Grazia at 23:00

Just watched Persuasion again myself, for the potentially twentyfifth time :D Could also be 40 times or more... Lost count!

Without JA my movie collection would stink!!!

Yes, the movies are seriously addictive!