Facebook, twitter,
cell phones bicker
Noises, images,
videos flicker
Streams of data
Flowing by
Everything happening
My, oh, my
No time to pause
No time to think
No time to fill your pen
With ink
Sound bites frommy life
come tumblingpast
Jumbled impressions
Nothing can last.

A horse-drawn carriage
Now enters the scene
An elegant gentleman
So calm, so very serene
He descends with a flourish
and a wonderful bow,
Takes up my gloved hand
and kisses it, wow, oh, wow.
It’s Mr. Darcy, of course,
I’m delighted to say,
“So charming to meet you.
I’m hoping you’ll stay.”

So I fetch my white parasol
My pelisse and my bonnet
We stroll on the verdure,
He writes me a sonnet.
He plays on the piano
Oh, such harmonious sounds,
We dance until morning
We ride to the hounds.
I’m sure when I’m with him
I’ll come to no harm


But then I’m awakened 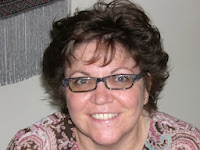 Monica Fairview is an ex-literature professor who abandoned teaching criticism about long gone authors who can't defend themselves in order to write novels of her own. Monica can be described as a wanderer, opening her eyes to life in London and travelling ever since. She spent many years in the USA before coming back full circle to London, thus proving that the world is undeniably round.

Monica's first novel, An Improper Suitor, a humorous Regency, was short-listed for the Romantic Novelists' Association's Joan Hassayan prize. Since then, she has written two traditional Jane Austen sequels: The Other Mr. Darcy and The Darcy Cousins (both published by Sourcebooks) and contributed a sequel to Emma in Laurel Ann Nattress's anthology Jane Austen Made Me Do It (Ballantine).

Originally a lover of everything Regency, Monica has since discovered that the Victorian period can be jolly good fun, too, if seen with retro-vision and rose-colored goggles. She adores Jane Austen, Steampunk, cats, her husband and her impossible child.

a Rafflecopter giveaway
Posted by Maria Grazia at 06:00

Love the idea of writing a poem, Monica. So sad to see it was a dream!

Thank you, Cassandra and Jo's daughter. It was fun to write.

I really loved the poem Monica!

A beautiful poem, Monica. I really hope it was not a dream and I can experience it for real.

Loved it! I wouldn't have wanted to wake up from that dream either.

Luthien -- It would be great to travel back in time, wouldn't it?