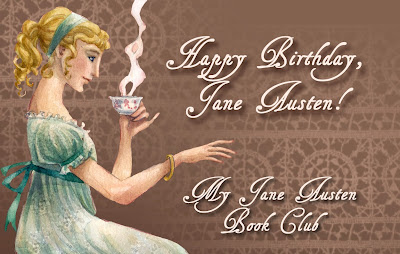 Jane Austen's novels have brought so much joy into my life and helped me enrich the lives of thousands of others! My stage adaptation of Pride & Prejudice has performed to tens of thousands of people across the UK, and the experience of sitting in a packed auditorium listening to the delighted laughter of audiences across the country, and feeling the hearts of all those present being touched by Jane Austen's beautiful observations and moving love stories - that has been so memorable and life enhancing. When I collaborated on the adaptation of Jane Austen's Emma, I wondered if it could match the experience, but thanks to some fantastic performances, especially from Jonathan Cecil as Mr Woodhouse, it was also a wonderful production. Seeing the response to her novels on stage in No. 1 theatres makes you realise just what an outstanding writer she is; her brilliant creation of characters, her exploration of relationships and her witty social observations which still speak to us so powerfully today, 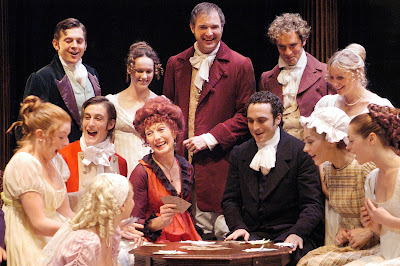 It's a dreary Sunday in England, and we've had hours of heavy rain: I can't help wondering how a mid December birthday would have affected Jane's enjoyment of her red letter day. Then I remind myself that she always had Christmas on the horizon, and with a large, happy family around her, it must have been an exciting time, brimful with anticipation, with the Christmas festivities only nine days away. So, on balance, Jane probably had many happy birthdays! And of course only last week, the sun was shining as we arrived in Lyme Regis on a beautiful, golden day to interview a surviving relative of Jane Austen - her great grand neice, Diana Shervington. Diana's grand mother was the grand daughter of  Jane's brother, Edward Austen (later Knight), and Diana has all the fun and love of life you associate with Jane Austen herself. We spent several fascinating hours with Diana, as she showed us precious possessions left to her from her famous aunt and her siblings: a game of 'spilikins', a pair of ivory, calf skin gloves which belonged to Jane and a lace cap and fichu that Jane herself embroidered among other memorabilia. Diana lives in the heart of Lyme Regis, a favourite haunt of her great aunt Jane, with its picturesque location on the cliffs overlooking the Dorset coast, and the famous Cobb which features in the novel, Persuasion.

A few weeks earlier in Bath, we filmed an interview at the Bath Fashion Museum with Rosemary Harden, the Curator: another fascinating insight into Jane's time in Bath and the latest styles and fashions of the Regency period. We are so excited about our progress with this fascinating new film. Do join us on the journey! 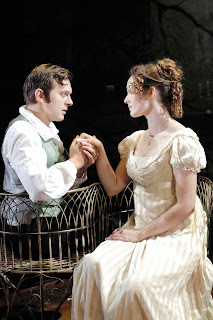 To find out more about this new film, and to help make it happen please visit our website ( and you might like to support our sales page with some exclusive goods and film memorabilia on offer). Here's the link www.fuschiafilms.com/jane-austen-film-products-and-events/
For regular updates follow us on www.facebook.com/JaneAustenOvercomingPrideAndPrejudice
and twitter @JaneAustenFilm and @FuschiaFilmsLtd

AND WATCH OUT FOR THE LAUNCH OF THE NEW WEBSITE JaneAustenProductions.com
due to go live early in the New Year!

a Rafflecopter giveaway
Posted by Maria Grazia at 16:00

I have never watch a stage adaptation of any Jane Austen's novel but I would love to attend given the chance. Alas so far there is none shown in my country yet as I know. Btw, I give my support to your film production of Jane Austen: Overcoming Pride and Prejudice and wish you the very best. I'm waiting to see the finish product.