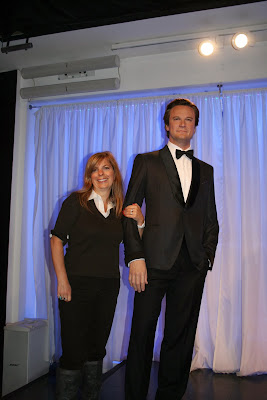 I never would have met Colin Firth…

…at Madame Tussauds wax museum in London! And I never would have set one of the funniest scenes I’ve ever written with the waxen Firth in my just-released book UNDRESSING MR. DARCY. Nor would I have had the fun of writing about an English “Mr. Darcy” who travels to America to promote his book by taking off his historical clothing at Jane Austen festivals. Consequently my American heroine wouldn’t have run off to England chasing after him, and she never would have visited London, Chawton and Bath. I can’t imagine!

Really, if it weren’t for Jane Austen, I don’t think I would have had a lifelong crush on Mr. Darcy, Mr. Tilney, and England itself.

Bless you, Jane Austen on your 238th birthday! Your writing keeps inspiring, 200 years down the pea-gravel road! 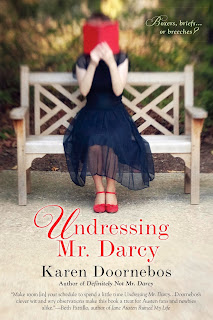 Karen Doornebos is the author of UNDRESSING MR. DARCY published by Berkley, Penguin and available here or at your favorite bookstore. Her first novel, DEFINITELY NOT MR. DARCY, has been published in three countries and was granted a starred review by Publisher’s Weekly. Karen lived and worked in London for a short time, but is now happy just being a lifelong member of the Jane Austen Society of North America and living in the Chicagoland area with her husband, two teenagers and various pets—including a bird. Speaking of birds, follow her on Twitter and Facebook! She hopes to see you there, on her website www.karendoornebos.com and her group blog Austen Authors.

You can win an ebook copy of Karen Doornebos's new novel in our great giveaway!

Check it out in the rafflecopter form below

a Rafflecopter giveaway
Posted by Maria Grazia at 10:30

Haha! Great picture, Karen. Love how it was part of your new novel too!

Color coördinated and all... What a cute couple you make!

Would love a copy....loved Karen's first book. Can't get ecopy here in Oz :(

I love Colin Firth and good for you if you do meet him personally. I can't wait to read the hillarious scene that you mentioned.