I don’t want to think about how awful that would have been!
I’ve spent numerous hours immersed in all of her books, which have given me more pleasure than any other author on the planet. When I think back to when I first got a computer and had access to the internet, the first thing I wanted to look for, apart from finding old copies of Jane’s books, was information about Jane Austen. Oh, the joy of discovering websites, like the Republic of Pemberley, where like-minded people gathered in chat-rooms, and where I could browse for hours on all things Jane. And when blogger started, there was all the excitement of connecting with people from all over the world and sharing the love of this favourite author who has touched so many hearts and minds. Without Jane, I wouldn’t have friends overseas, and the greatest joy has been meeting so many of them, as well as writing to them.
If not for Jane, I doubt I would have become a published author. If not for Pride and Prejudice, I would not have wondered about how Lydia Bennet’s Story might have turned out, or thought about Georgiana’s eventual happiness in Mr Darcy’s Secret, or considered the possibility of time travel to meet Jane Austen at Steventon in Project Darcy. No Jane Austen would have meant no Sense and Sensibility, nor the fun of writing about Colonel Brandon holding his own for Marianne’s heart in Willoughby’s Return. To consider a world without Persuasion is impossible-would I have discovered Bath, a city I love, if I’d never read Jane’s wonderful novel?! And I should never have been able to have my heroine Sophie fall in love with Jane’s sailor brother in Searching for Captain Wentworth.

I’m very lucky to have so much love from family and close friends - but the amount that has come into my life as a result of associations with all that is Jane, is extraordinary - I treasure it and hold it dear. Happy Birthday Jane Austen - a life without you is simply unthinkable! 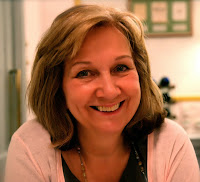 Jane Odiwe is the author of five Austen-inspired novels, Project Darcy, Searching for Captain Wentworth, Mr Darcy's Secret, Willoughby’s Return, and Lydia Bennet’s Story. Jane is a member of the Jane Austen Society; she holds an arts degree, and initially started her working life teaching Art and History. When she’s not writing, she enjoys painting and trying to capture the spirit of Jane Austen’s world. Her illustrations have been published in a picture book, Effusions of Fancy, and are featured in a biographical film of Jane Austen’s life in Sony’s DVD edition of The Jane Austen Book Club.

a Rafflecopter giveaway
Posted by Maria Grazia at 11:30

It just doesn't bear thinking about, does it, Jane? I am so delighted to have met you through a shared love of her works and your own writing!

Chatting about Jane is one of my favorite things to do :D

What a lovely post, Jane! I loved you words and you're right, a life without Jane is unthinkable! Thank you for sharing your thoughts.

Cassandra, Jo's Daughter and Maria - you are all part of what makes the love of Jane Austen so wonderful! Thank you very much!,

I'm with you on this one, Cassandra. I wouldn't have some of the great Austenesque fiction and meet like-minded people who talk about Jane Austen, her world and her novels. I'm glad that I can make new friends and share our love of Jane Austen